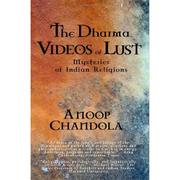 Published 2008 by UKA Press in London, U.K. .
Written in English

Mohan Chaube leads a double life as a Brahmin priest and a radical professor, and comes to repudiate all religions, including his own. After settling down to watch racy videos sent to him in secret, he comes face to face with his own assumptions, and here he presents the reader with the vivid, dramatic, personal stories behind those videos, while also weaving through Hindu mysteries, myths, rituals, rites, and festivals which wallow in sex and violence. He seeks to show how faith leads to irrational actions, and has undermined human rights, gender equality, and ethnic diversity. At the same time, he uses satire and humor to show the dark side of a religion followed by over a billion people, some of whom are amongst the best educated in the world.